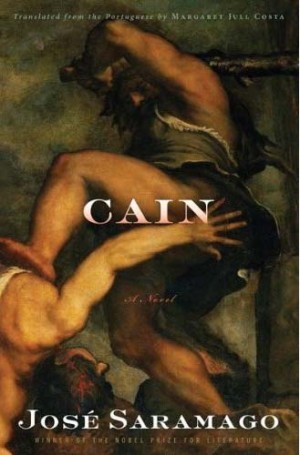 Portuguese novelist José Saramago, Nobel Prize winner and author of the bestselling Blindness, created something of a stir before his death when he declared that society would have been better off without the Bible. In so doing, he joined a venerable critical tradition in Western culture dating back to the Enlightenment. Voltaire, for example, wrote a satirical essay about the Book of Genesis, pointing out what he considered were a number of absurdities in the Old Testament narrative, not least the story of Cain and Abel.

Readers of the Bible will recall this twosome as the offspring of Adam and Eve. Abel was keeper of flocks, Cain a tiller of the soil. God found favour with the sacrificial offerings of Abel, but not with those of his brother, stirring up resentment so powerful in Cain that he slew Abel. Asked by God where his brother Abel was, Cain produced the notable response, “Am I my brother’s keeper?” As punishment, he was condemned to wander the Earth, although God also protected him by putting a mark — some scholars believe it was a tattoo — on Cain, lest anyone should kill him on sight.

Voltaire has a field day with this grim tale. God, Voltaire complains, accepts Abel’s offering and rejects Cain “without any trace of a reason.” In an equally arbitrary spirit, God “takes the criminal under His own protection. He declares that anyone who avenges the murder of Abel shall be punished with seven fold the punishment inflicted on Cain. He puts on him His sign as a safeguard.”

Voltaire’s moral indignation is very much the note of Saramago’s Cain, a novel first published a year before Saramago’s death in 2010, and now newly translated by Margaret Jull Costa. The third-person narrator declares that this is an “instructive and definitive history of cain, undertaken with unprecedented boldness.” (Cain’s name, like all the other characters, including God, is presented throughout in lower case.) The boldness largely consists of Cain blaming God for what Cain did, both because God needlessly stirred up enmity between the brothers and because He failed to remove the murder weapon, a jawbone, in timely fashion.

This mystery of the two brothers and their fatal rivalry pales in comparison to the enigma of the parents’ expulsion from Eden for eating from the fruit of the tree of knowledge — an episode, the narrator says in something of an understatement, that “has never been satisfactorily explained.” This complaint, that the ways of the Lord are mysterious, that crucial actions are never explained, is a refrain running throughout the novel. The acceptance of Abel’s sacrifice and not Cain’s, for example, “still has not been explained,” according to the narrator. Nor has God’s protection of Cain. “Don’t ask me why he made that promise,” the narrator can only say. “He didn’t tell me and I’m not sure there is an explanation.” The narrator neatly summarizes the theme of Saramago’s novel: “The history of mankind is the history of our misunderstandings with god, for he doesn’t understand us and we don’t understand him.”

As violence increases in Cain’s world, the tone of complaint and misunderstanding harshens. Was it necessary, Cain wonders, for God to incinerate the people of Sodom, including women and children? Was it necessary for God to order Joshua’s army to slaughter the Canaanites, including women and children, in its march through the Holy Land? Is God evil, Cain asks himself, or is the creator of heaven and Earth “completely mad?”

The story of Job seems to bring us closer to the mystery of God’s nature. Job’s terrible fate — he loses his family and wealth, and succumbs to a loathsome disease — ensues because of a wager between God and Satan, God betting that Job will still remain faithful despite all his misfortunes. Cain is appalled. It’s the same treatment he received from the hands of God — “a question of putting you to the test,” according to God. When God also puts the patriarch Abraham to the test by demanding the sacrifice of his only son Isaac, the latter can only remark, “I don’t understand this religion.”

A bright spot in the narrative would seem to be Cain’s encounter with the voluptuous and insatiable Lilith, a female demon mentioned by the prophet Isaiah. She and Cain become lovers, exhausting themselves with pleasure, and thereby rebuking, perhaps by way of contrast, the sanguinary pursuits of the Israelites. But the narrator compares their lovemaking to their devouring of each other, and Lilith ultimately stands for nothing except pure physical passion.

As Cain is whirled through time and space — another of the novel’s enigmas, but a literary one this time — there is no development of character. There is only argument. Even the angels participate in these debates, expressing doubt about the wiping out of God’s first version of humanity in the great flood, to be replenished by Noah and his family. “To be perfectly frank,” they caution the Lord, “we don’t see how the second experiment will be any more satisfactory than the first.” In fairness to God, the narrator stacks the deck against Him with various asides not found in the Bible. The narrator portrays Abel, for example, as being boastful and mocking, an addition to the story that rather alters its meaning. On a deeper level, Saramago’s narrator has no more appreciation of the language of myth than the average reader has knowledge of Swahili.

It’s a sprightly narrative, nonetheless, with an unconventional format. There are no quotation marks, and readers are forced to reread frequently to make sure they understand just who is speaking. I’m not sure why Saramago has adopted this approach, but it does work against the laziness of readers without taxing their patience unduly. There are also certain puzzling motifs, such as the occasional appearance of a man leading two sheep, and admiring references to donkeys, which conceivably could allude to the donkey ridden by Christ into Jerusalem. It’s anyone’s guess.

As for the moral of the story, that the God of the Hebrew Bible is mad or evil, few will be scandalized at this late date. Many readers, not all of them ill-disposed to Judaism or Christianity, have long since decided to view this God as a fictional character, and by such means to soothe their religious sensibilities. But we don’t know the difficulties God faced in first creating the human race and then trying to communicate with His creatures. It couldn’t have been easy when so many human beings, then and now, had a generous dose of murder in their hearts.