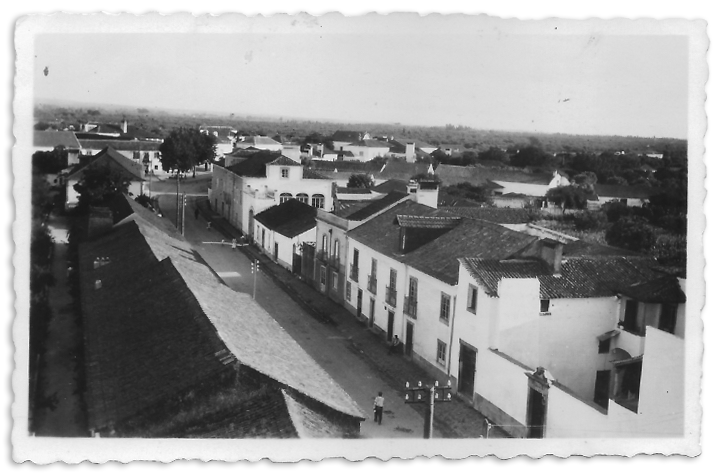 The family moves to Lisbon where his father begins working as a policeman.
In December, his brother Francisco dies at the age of four. 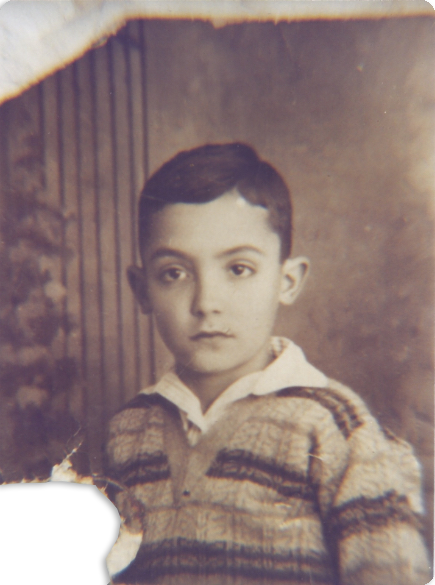 When he enrols in primary school, the family learn that a clerk at the Registry Office in Golegã included the family nickname “Saramago” on his birth certificate. He thus becomes the first Saramago in the Sousa family. Otherwise, his name would have been José de Sousa. 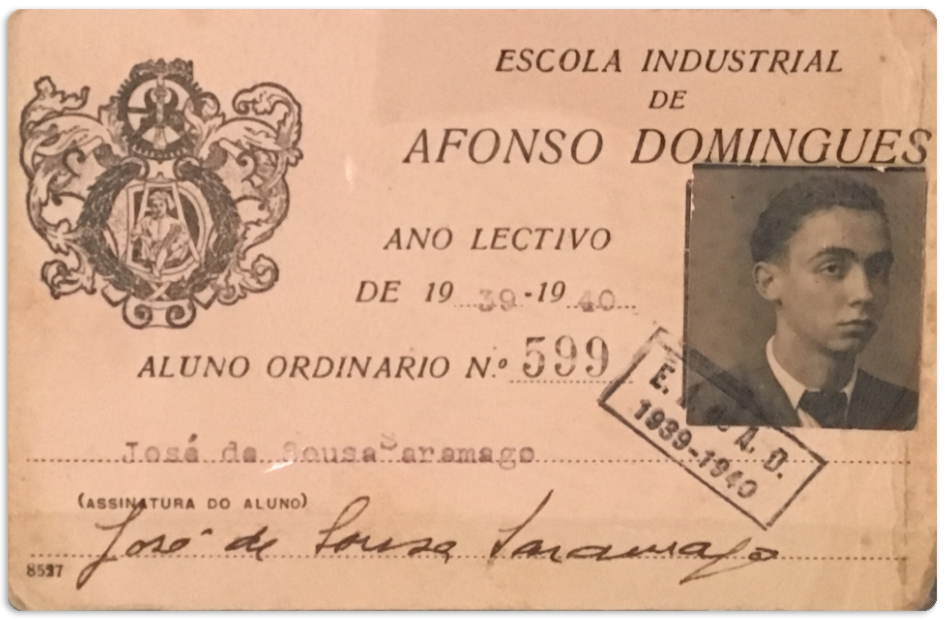 During their time in Lisbon the Sousa family have a life full of hardships, living in rented rooms and having to move frequently.

Enrols at the Liceu Gil Vicente, where he begins his secondary education, taking the normal school curriculum and a technical course.

Lack of money means that he is transferred to the Escola Industrial de Afonso Domingues, a technical college, where he remains until 1940.
During his childhood and adolescence, he spends long periods in Azinhaga with his maternal grandparents. 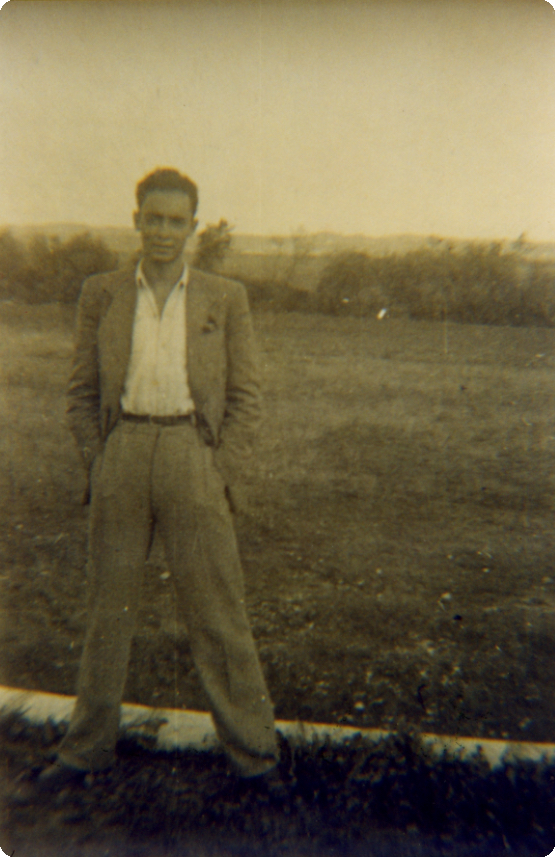 His mother gives him his first book: The Warbler of the Mill, the Portuguese translation of La Fauvette du moulin by Émile Richebourg.

He completes his course in metalwork at the Escola Industrial de Afonso Domingues and gets his first job in the workshop of the Civil Hospitals in Lisbon.
He spends his evenings at the municipal library in Palácio das Galveias: “reading whatever I happened to come across on the shelves or in the catalogues, with no one to advise me, and with the creative delight of a sailor who invents the places he discovers ”.

Employed in the administrative offices of the Civil Hospitals in Lisbon. 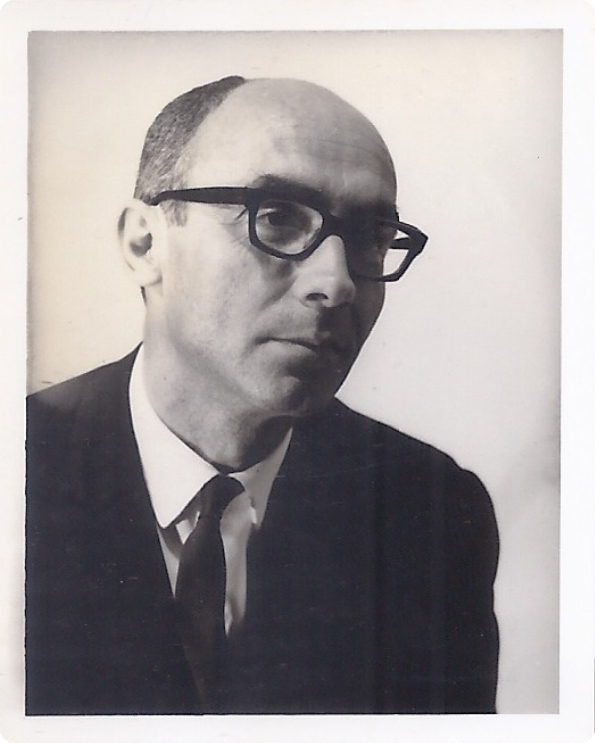 Gets a job at the Social Welfare Office for people working in the ceramics industry, but is dismissed because of his support for Norton de Matos, the opposition candidate running for President.
Marries the painter Ilda Reis. 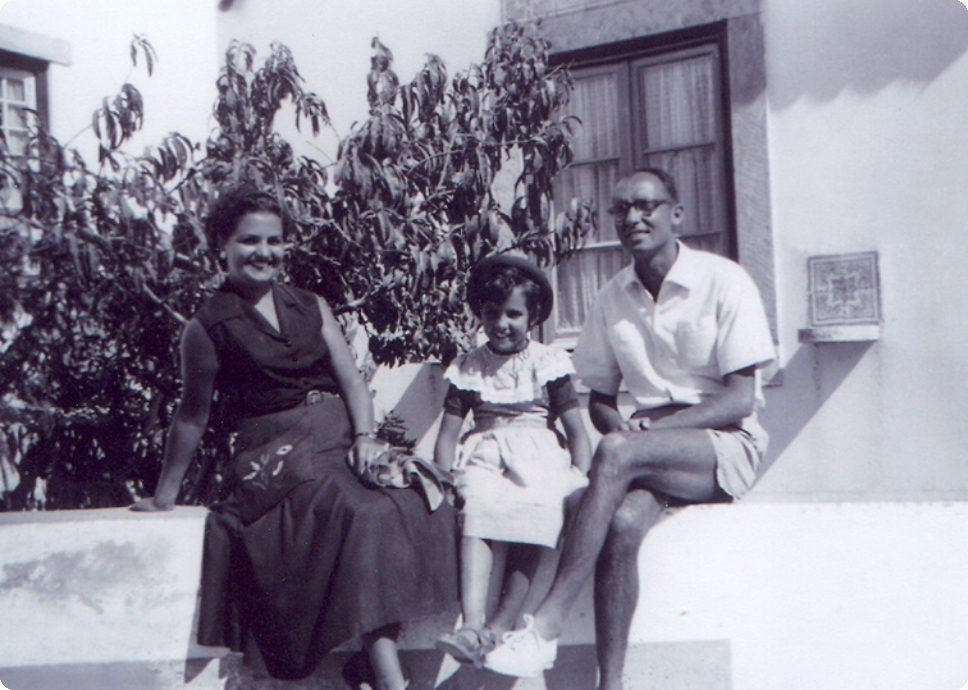 Publishes his first novel, Land of Sin (Land of Sin), which was initially entitled The Widow (The Widow).
His daughter Violante is born.
From now until 1953 and during the latter half of the 1950s, he writes numerous poems and stories - some of which were published in magazines and newspapers - and begins work on at least four novels, of which he finishes only one.

Thanks to his former teacher Jorge O'Neil, he gets a job at the Pensions Department of Companhia Previdente, dealing with grants and pensions. 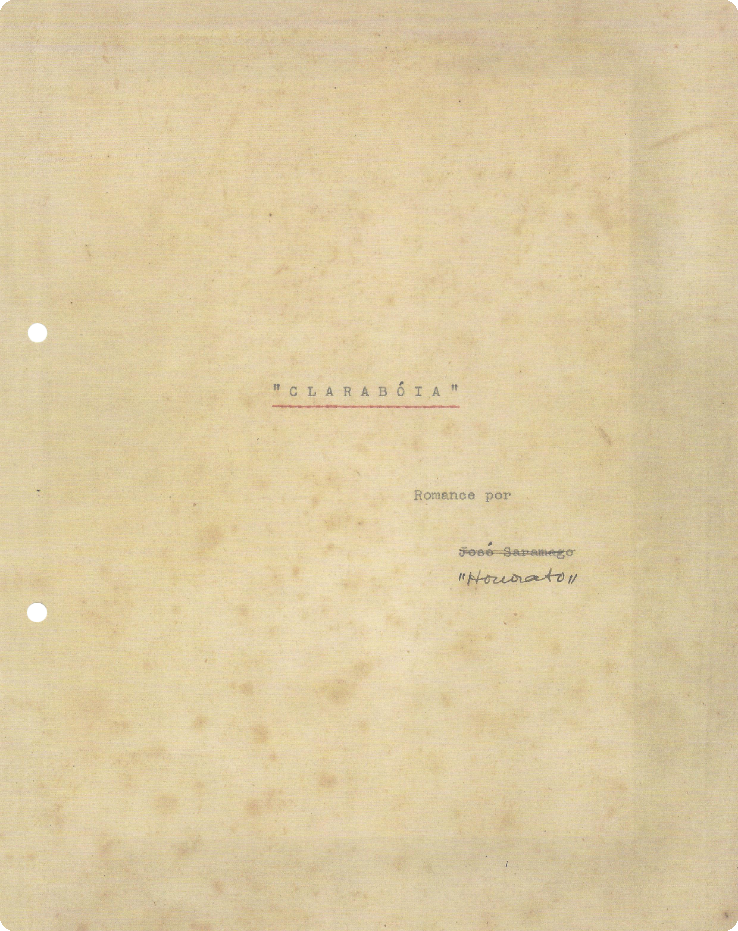 Finishes his novel Skylight (Skylight), in which he includes a series of unfinished stories with titles such as Honey and Fel (Honey and Bile), The Walled (The Imprisoned) and Road (Street). The novel would only be published after his death.

At the invitation of Nataniel Costa, he begins collaboration with the production department of the Cor Studios publisher. His name is beginning to be known in the world of literature and culture. He starts work as a translator, translating more than 60 books between now and the mid-1980s. In the latter half of the 1950s, he translates about 16 books by various authors, among them Colette and Tolstoy. 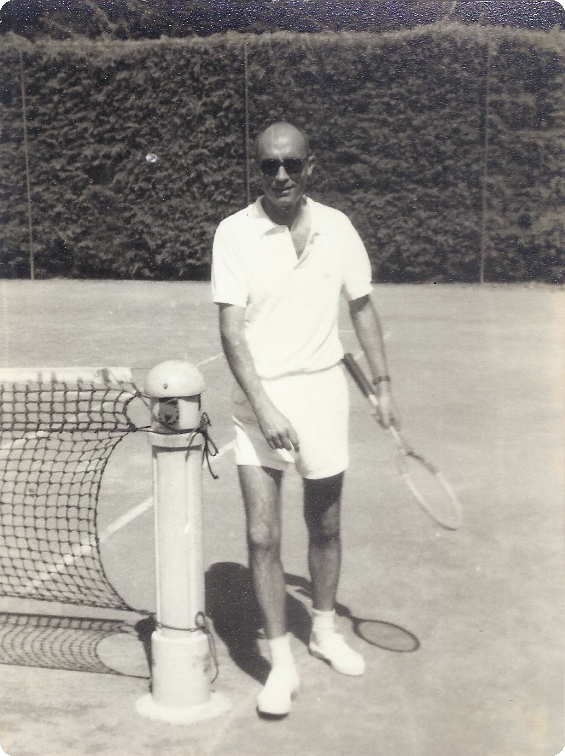 Leaves his job at Companhia Previdente to work exclusively for Estúdios Cor.

On 13 May, his father dies in the Hospital dos Capuchos, aged 68.

His first book of poetry is published, Possible Poems (Possible Poems).
Throughout this decade, he continues to work as a translator, although at a slower rate. He translates, among others, Colette, Cassou, Audisio, Maupassant and Bonnard. 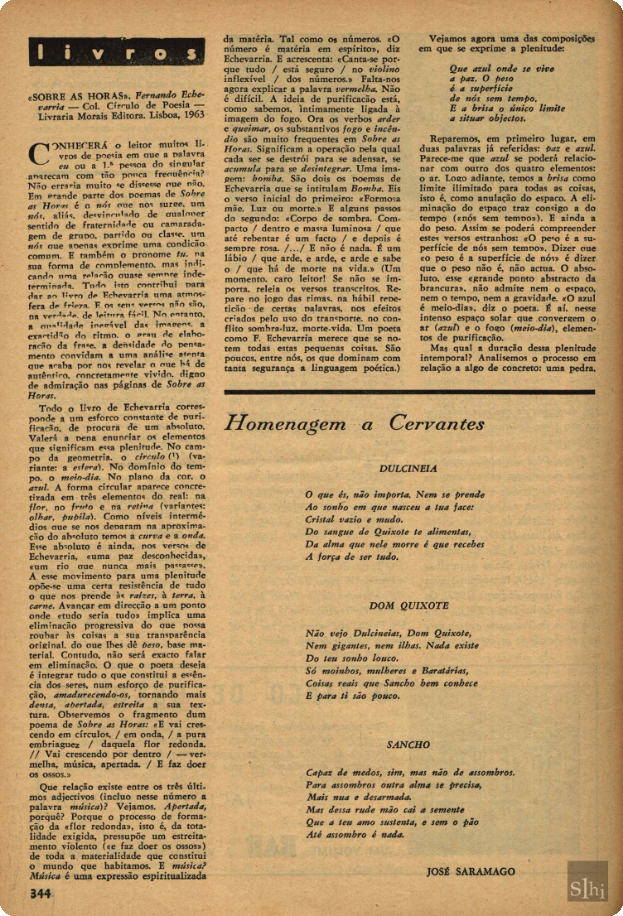 Works as a literary critic on the magazine Seara Nova. In this role, he writes reviews of twenty-three works of fiction, among them books by: Jorge de Sena, Agustina Bessa-Luís, Júlio Moreira, Alice Sampaio, Augusto Abelaira, Urbano Tavares Rodrigues, José Cardoso Pires, Rentes Carvalho, Nelson de Matos, Manuel Campos Pereira…
He writes regularly for the newspaper The capital, in the sections entitled “Up and Down the Street” (Up and Down the Street) and “From this World and the Other” (Of this World and the Next).

Divorced from Ilda Reis.
Moves to Lisbon, after living for twelve years in Parede just outside Lisbon.
Begins a relationship with the writer Isabel da Nóbrega, which will last until 1985.
Publishes a second book of poems, Probably Joy (Probably Joy). 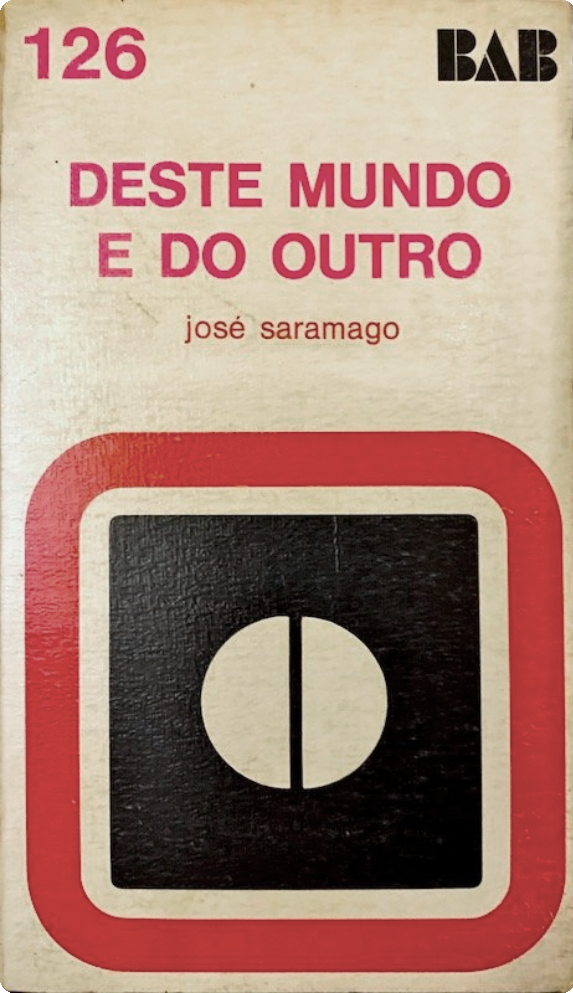 Publishes numerous columns in Jornal do Fundão.
Works as an editorial writer on Diary of Lisbon.
His first granddaughter is born, Ana.

Traveler's Luggage (The Traveler's Baggage) is published: a selection of the columns he wrote for A Capital and Jornal do Fundão between 1971 and 1972.

After the Carnation Revolution on 25 April, as part of the Ministry of Education, he heads up a team supporting youth organizations.
Works as a consultant for the Ministry for Social Communication.
Publishes his first volume of political editorials, The Opinions that DL Had (The Opinions that the DL Had), which collects together the editorials he published anonymously in the Diary of Lisbon in 1972 and 1973.

Appointed assistant editor on the Daily News. His life is thrown into turmoil when he is accused of being a radical Marxist; that clash with the more moderate politics of the Revolution results in him being removed from his post at the newspaper, and he receives no support from his party.
When he finds himself unemployed on 25 November, he decides not to look for another job and to devote himself exclusively to writing and translation. He steps up his translation work - his only source of income - and between 1976 and 1979, he translates around twenty-seven works, many of them political in nature, by authors such as: Frémontier, Zhivkov, Moskovichov, Pramov, Grisnoni, Poulantzas , Bayer, Hegel and Romain.
Becomes part of the Unitarian Movement of Intellectual Workers for the Defense of the Revolution (MUTI - Intellectual Workers for the Defense of the Revolution).
Publishes another book of poetry, The Year of 1993 (The Year 1993). 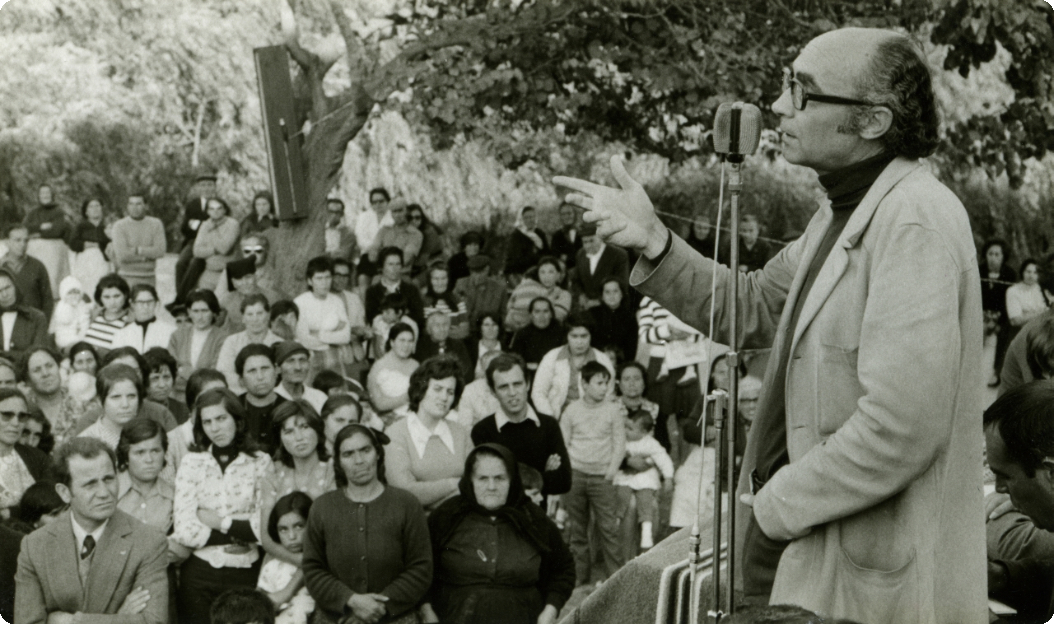 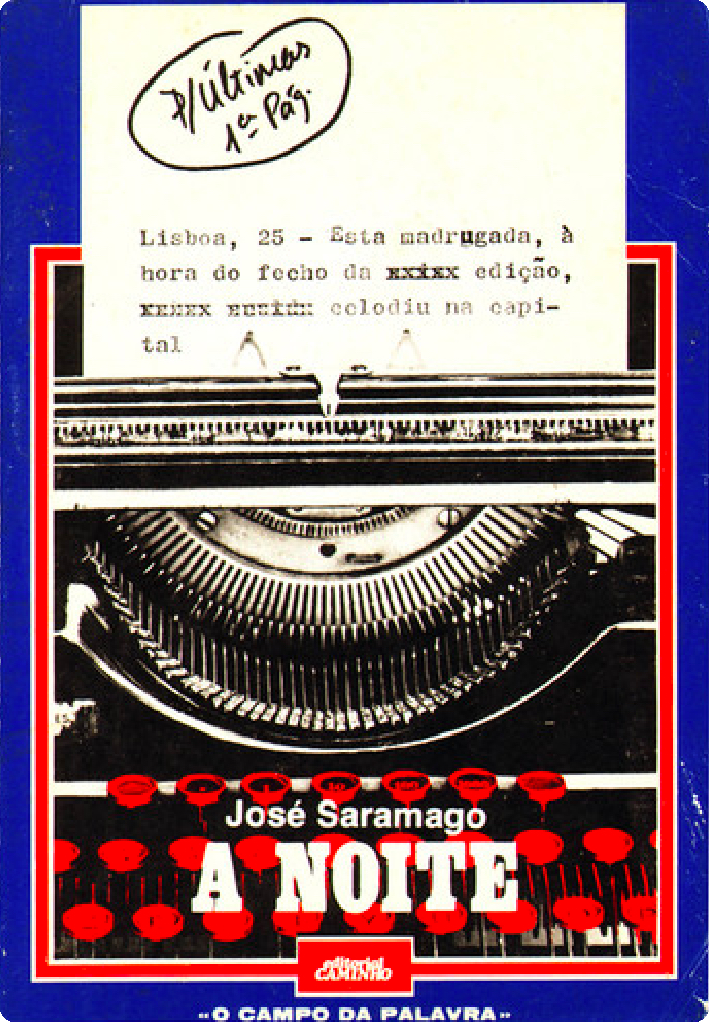 Publishes the book of short stories, Almost object (The Lives of Things).
Publishes the play In the evening (The Night), which receives the Portuguese Critics' Prize.
His story "The ear" (Hearing) is included in Poetics of the five senses (The Poetry of the Five Senses), an anthology of writings by various authors on the subject of the senses.
The Readers Circle commission him to write a travel book about Portugal. 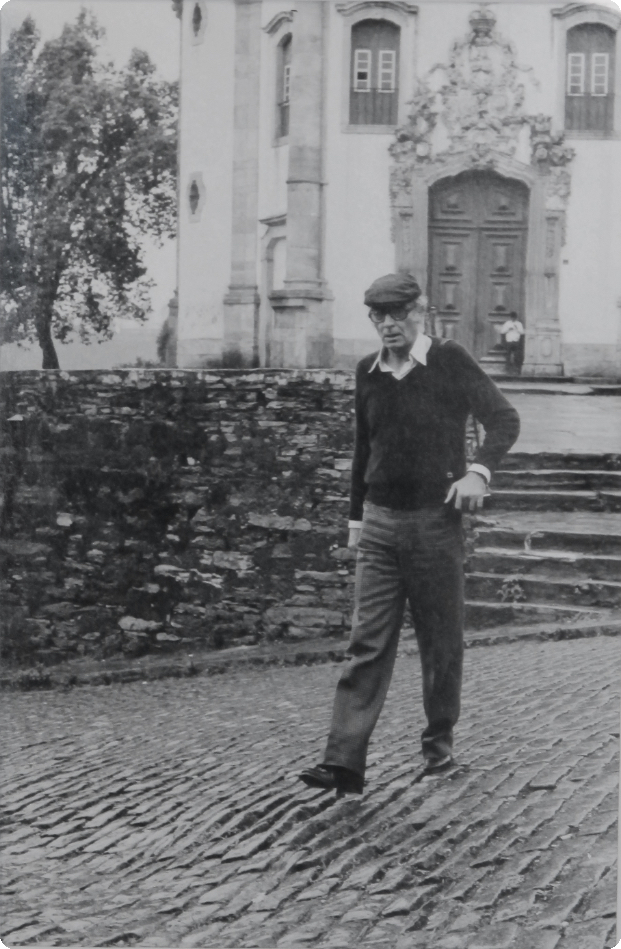 Writes Raised from the Ground (Raised from the Ground), the first of his novels to be written in true Saramago style. He is awarded the Lisbon City Prize.
Publishes the play What will I do with this book? (What shall I do with this book?), Which is produced that year at the Teatro de Almada. Between 1980 and 1985, he translates nearly ten books by various authors: Bautista, Honoré, Zhivkov, Duby, Hikmet…

Wins the Pen Club Award and the Lisbon Municipality Literary Award for Baltasar and Blimunda.

Appointed Commander of the Military Order of Santiago de Espada by the President of the Republic, Mário Soares.
1985 Pen Club Award for The Year of the Death of Ricardo Reis.
Critics Award 1985 from the Portuguese Critics Association. 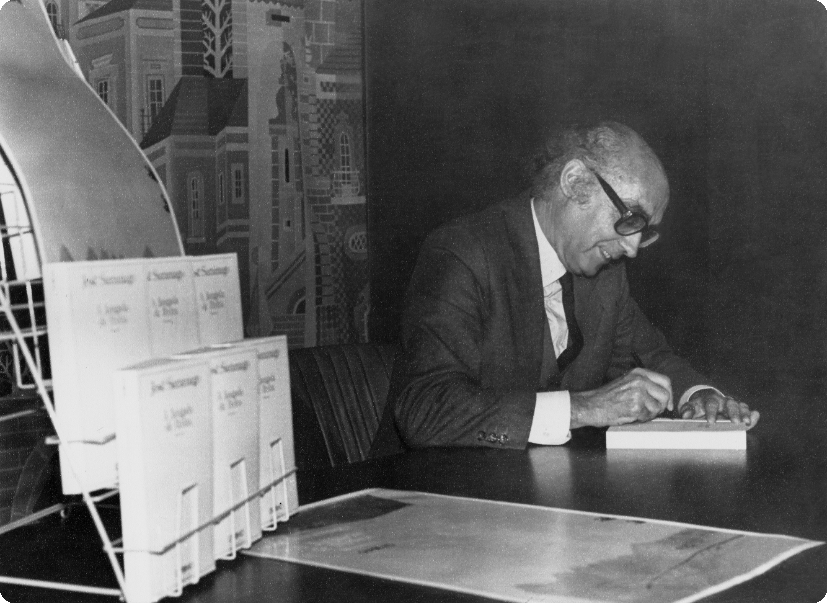 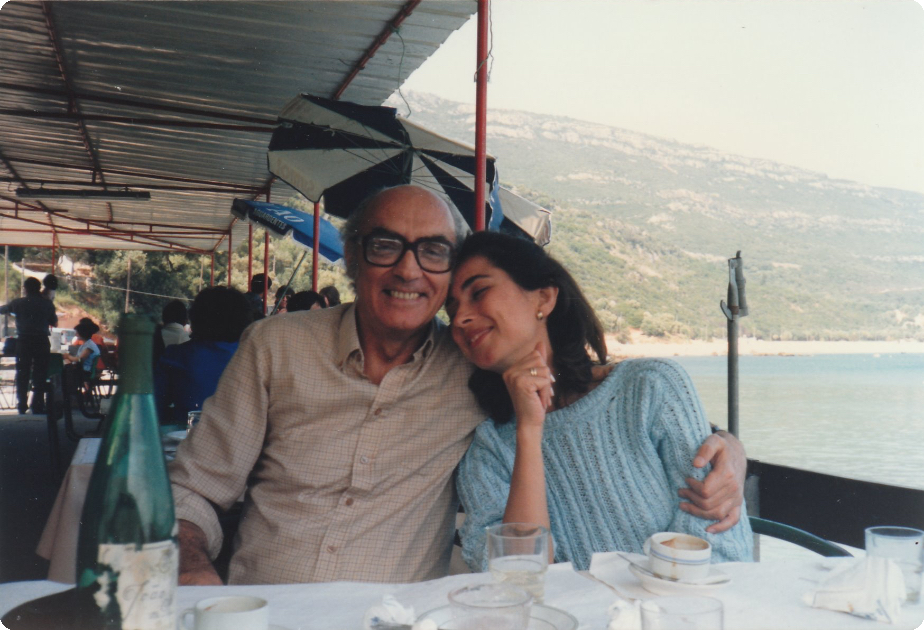 the opera Blimunda premieres at the Scala in Milan, with libretto by the Italian composer Azio Corghi, based on the novel Baltasar and Blimunda. 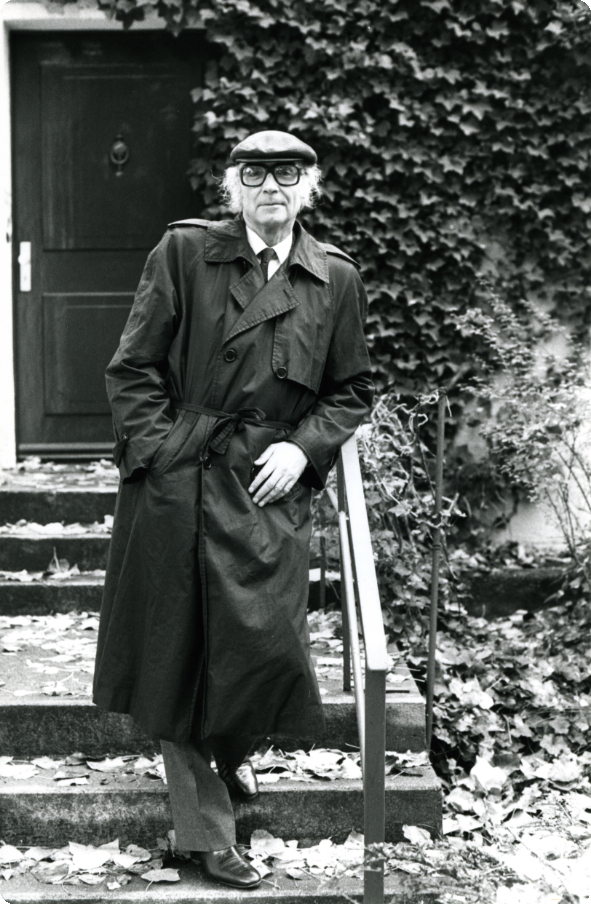 The Portuguese government orders the removal of The Gospel According to Jesus Christ (The Gospel According to Jesus Christ) from the shortlist for the European Literary Prize.
In Italy, he receives the Premio Internazionale di Letteratura Ennio Flaiano (Pescara, Italy) for the novel Raised from the Ground.
Letterario Internazionale Mondello Award (Palermo, Italy).

Moves to Lanzarote.
Publishes his fourth play, In Nomine Dei, which is awarded the Grand Prize for Theater of the Portuguese Writers Association.
Become a member of the International Parliament of Writers, whose headquarters are in Strasbourg.
Awarded the Independent Foreign Fiction Award (Britain) for Giovanni Pontiero's English translation of The Year of the Death of Ricardo Reis.
Premiere in Münster (Germany) of the opera divara, with music by Azio Corghi and a libretto based on the play In Nomine Dei. 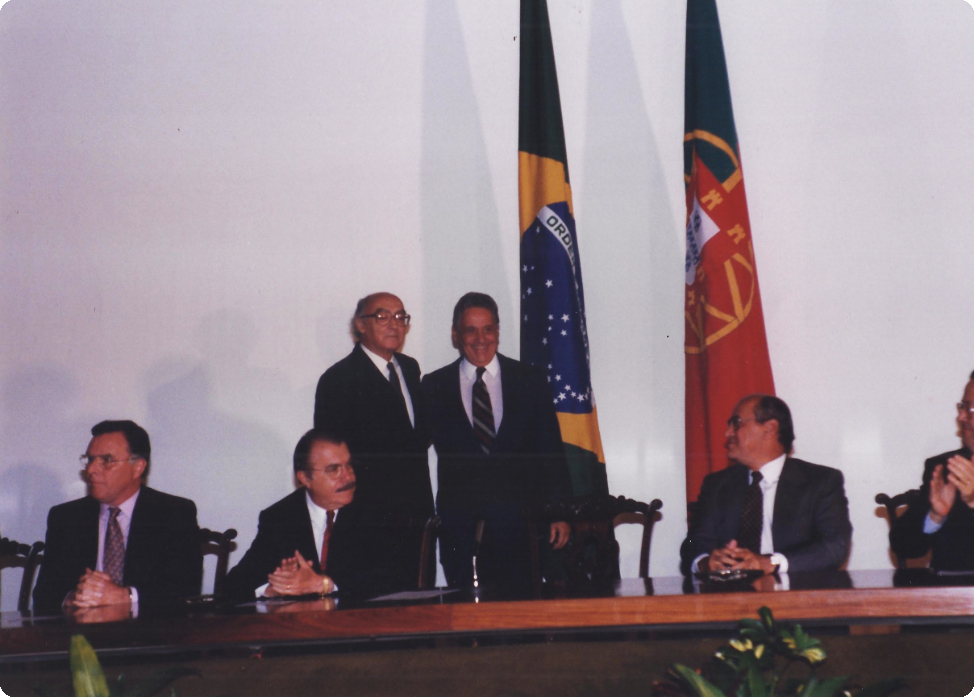 Publishes Essay on the Blindness (Blindness).
Publishes the second volume of Lanzarote notebooks.
Awarded the Camões Award.
Receives honorary doctorate from the University of Manchester (Britain).
Premiere of Lazzaro's death, with music by Azio Corghi and libretto based on In Nomine Dei, The Gospel According to Jesus Christ and Baltasar and Blimunda.

Travels to Brazil to receive the Camões Award.
Publishes the third volume of Lanzarote notebooks.

Awarded the Nobel Prize for Literature “…for his ability to help us understand transient reality through sustained by imagination, compassion and irony…”
Publishes the fifth volume of Lanzarote notebooks.
Awarded the Scanno/Universitá G. D'Annunzio Award for object almost (The Life of Things). 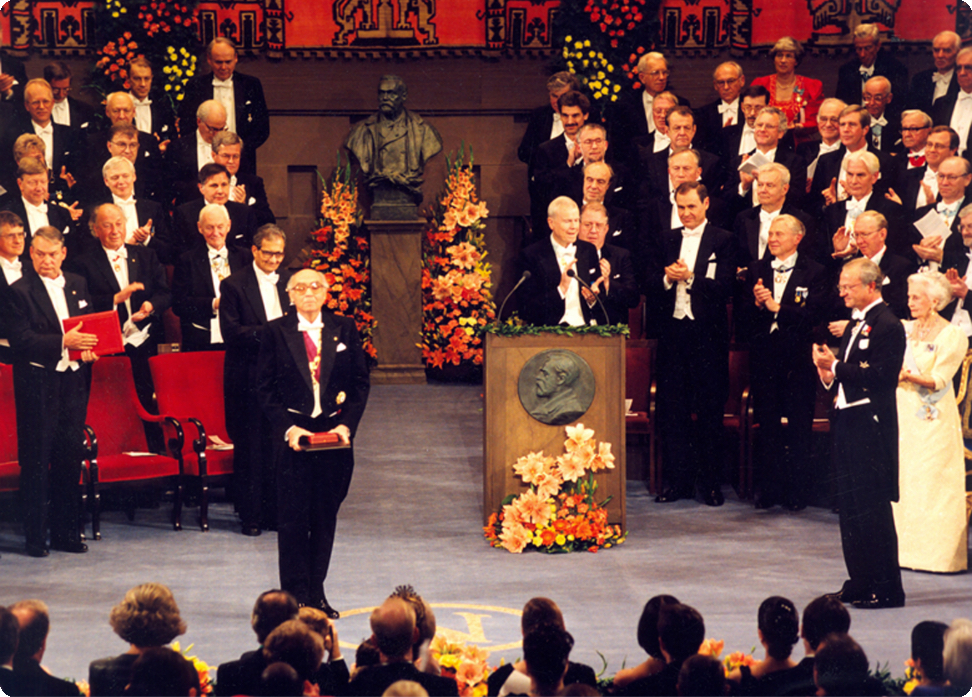 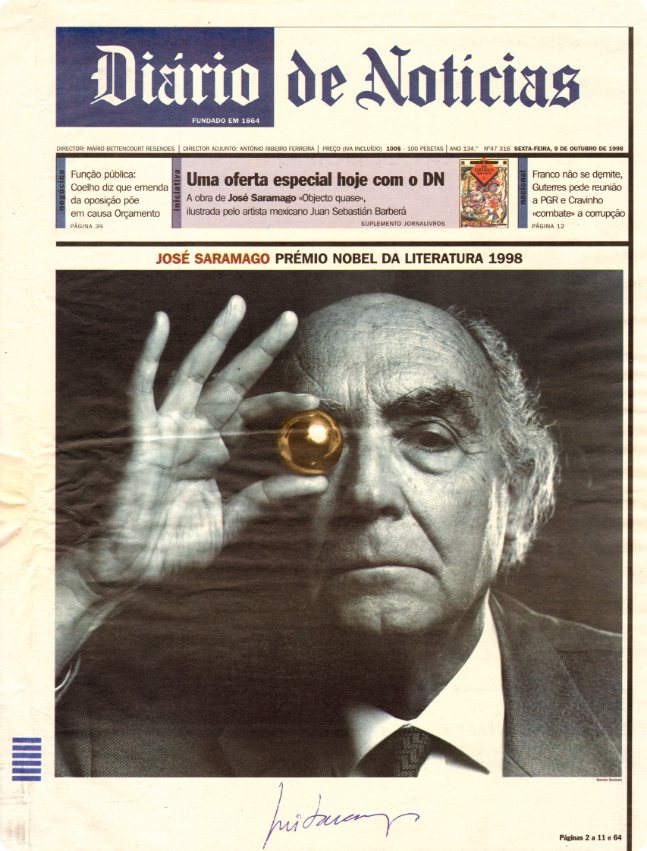 Publishes political sheets (Political writings).
Declared Adoptive Son of Tías (Lanzarote).
Visits and stays for a few days in Mexico with the Zapatistas.
Receives honorary degrees from twelve universities around the world. 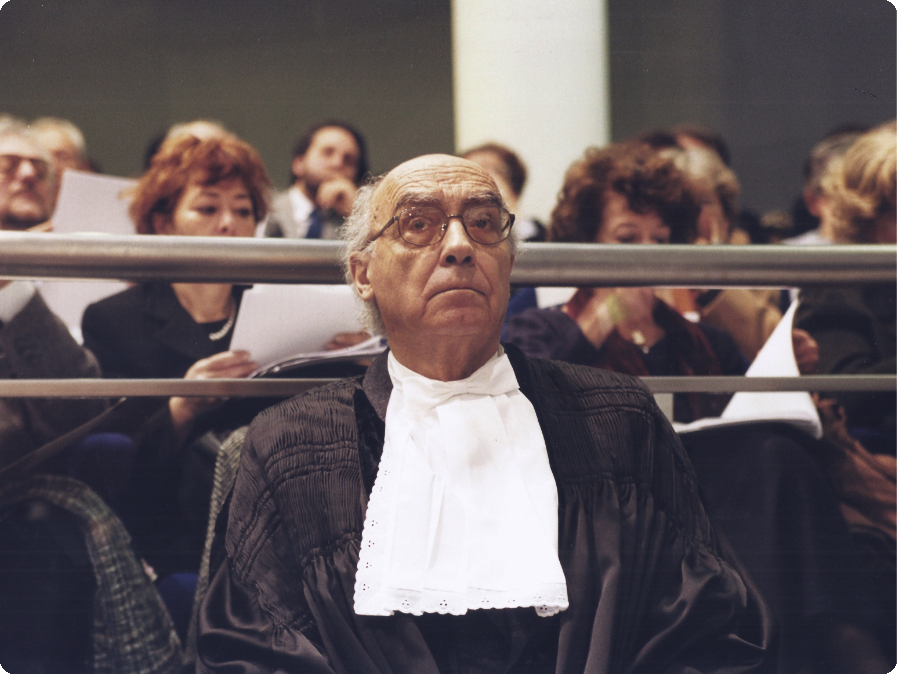 Publishes The Duplicate Man (The Double). 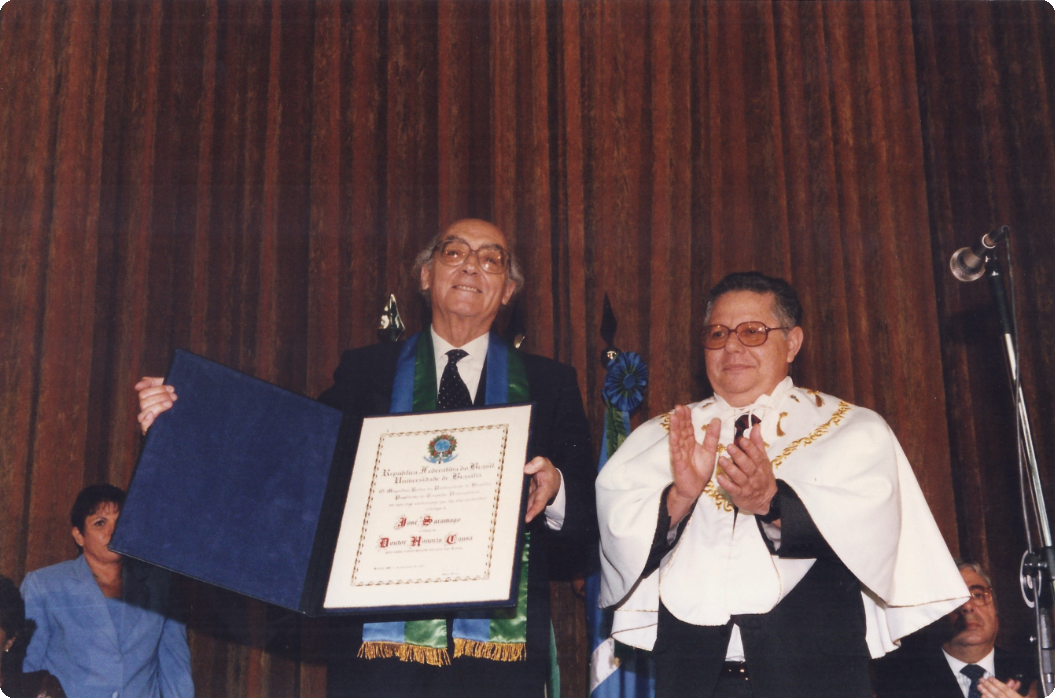 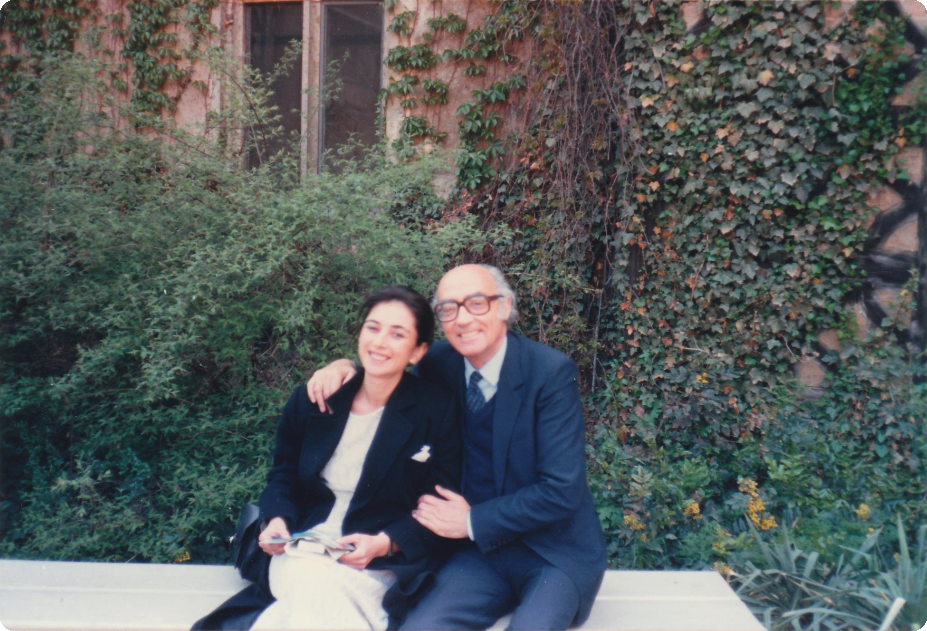 In February, he begins the memoir The Small Memories (Small Memories), and finishes it in August. The project has been planning and pondering for more than twenty years.
In the summer, he opens the library at his house in Tías, Lanzarote, with a cultural celebration featuring the dancer María Pagés and the singers Luis Pastor and Pasión Vega, and which is attended by many friends from Spain and Portugal.
Publishes Small Memories. The launch takes place in Azinhaga and coincides with his 84th birthday.

In February, he begins writing The Elephant's Journey (The Elephant's Journey). By May, he has written about forty pages, but has to stop due to health problems. He will only return to the novel in February 2008.
On 7 March, his novel blindness is brought to the New York stage by the artistic director of the Godlight Theater Company.
In June, he creates the José Saramago Foundation (the José Saramago Foundation).
On 23 November, the Fundación César Manrique (Lanzarote) opens a major exhibition entitled Foundation. La consistencia de los sueños (José Saramago. The Consistency of Dreams). Curated by Fernando Gómez Aguilera, it is dedicated to Saramago's life and literary work.
On 18 December, he is taken into hospital in Lanzarote, suffering from pneumonia, which evolves into something that brings him close to death. He remains hospitalized for one month and three days.

On 22 January he is released from hospital and returns home.
The very next day, he resumes writing The Elephant's Journey.
On 1 March, the first event of the José Saramago Foundation takes place in Lanzarote, with a conversation in the library between Saramago and María Kodama about Borges. The same event will take place in Lisbon on 29 June, this time with the title: “Shall we talk about Borges?”
On 22 August, at home in Lanzarote, he finishes The Elephant's Journey. 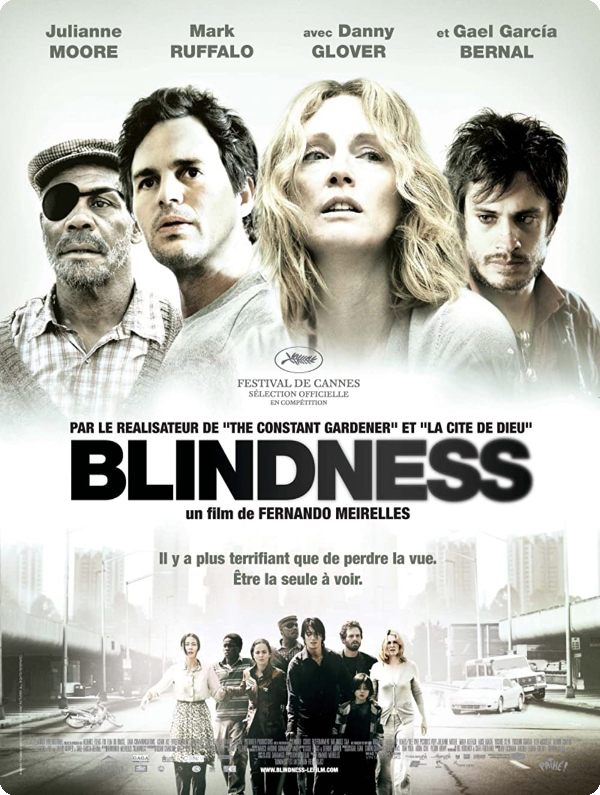 On 18 and 19 June he follows the route taken by Salomão the elephant in The Elephant's Journey. Accompanied by colleagues from the Foundation and a few journalists, he travels by bus from Belém (Lisbon) to Figueira de Castelo Rodrigo on the frontier with Spain, following an itinerary with stopping points in Constance, Castelo Novo, Belmonte, Sortelha, Cidadelhe and Castelo Rodrigo.
On 25 June, the launch of The notebook (The Notebook) takes place in Lisbon. Followed on 30 June by the launch of the novel Cain (Cain). 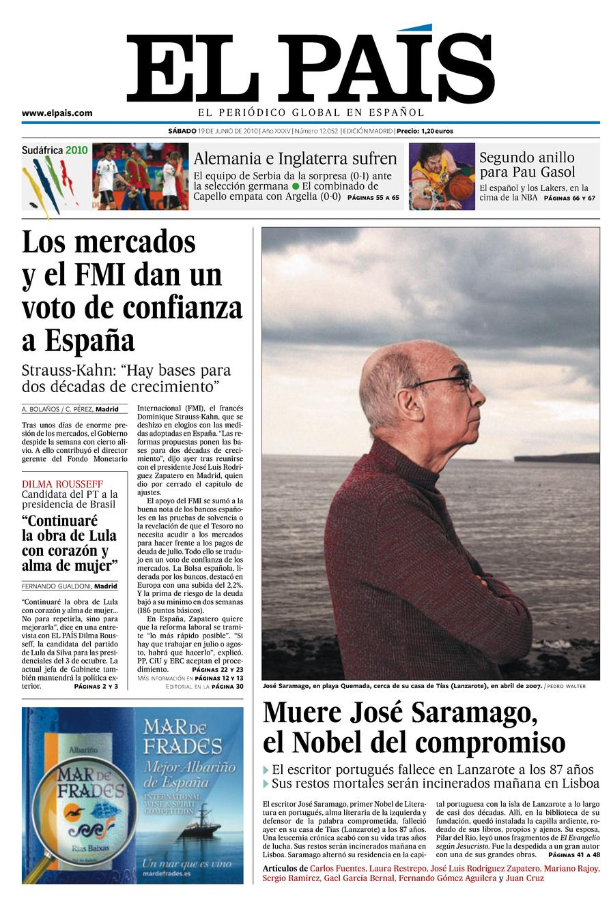 The Notebook 2 (Notebook 2) is published with a preface by Umberto Eco; a compilation of the pieces written by Saramago for his blog “Saramago's Notebook” (Saramago's Notebook), from September 2008 to November 2009.
On 18 June, at 12.30, José Saramago dies at his home in Lanzarote, surrounded by his family and his closest friends.
On 19 June, his body is returned to Lisbon on a plane provided by the Portuguese government.

Publication of the novel Skylight (Skylight), written in 1953 but never previously published. 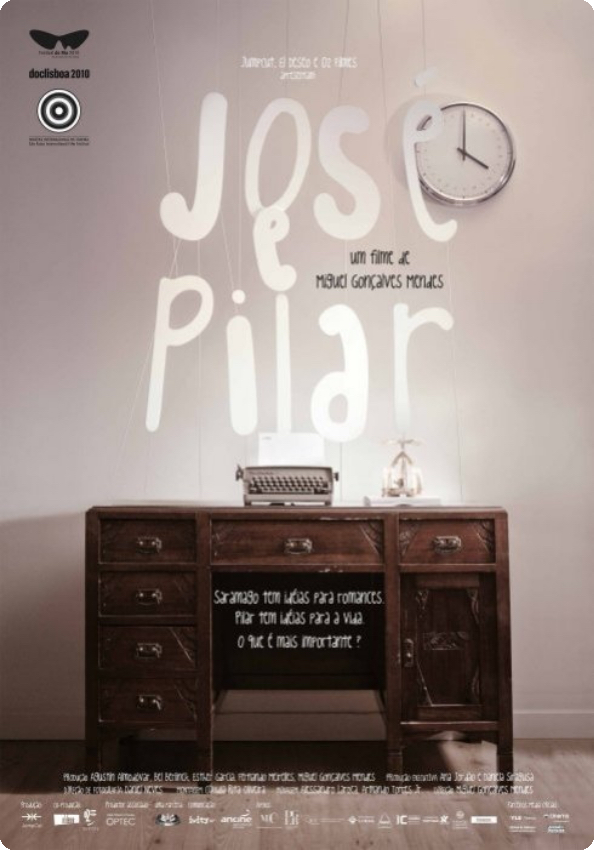 Publication by the Foundation of the essay From the Statue to the Stone (Statue to Stone), based on a lecture given by Saramago in Turin in 1997. 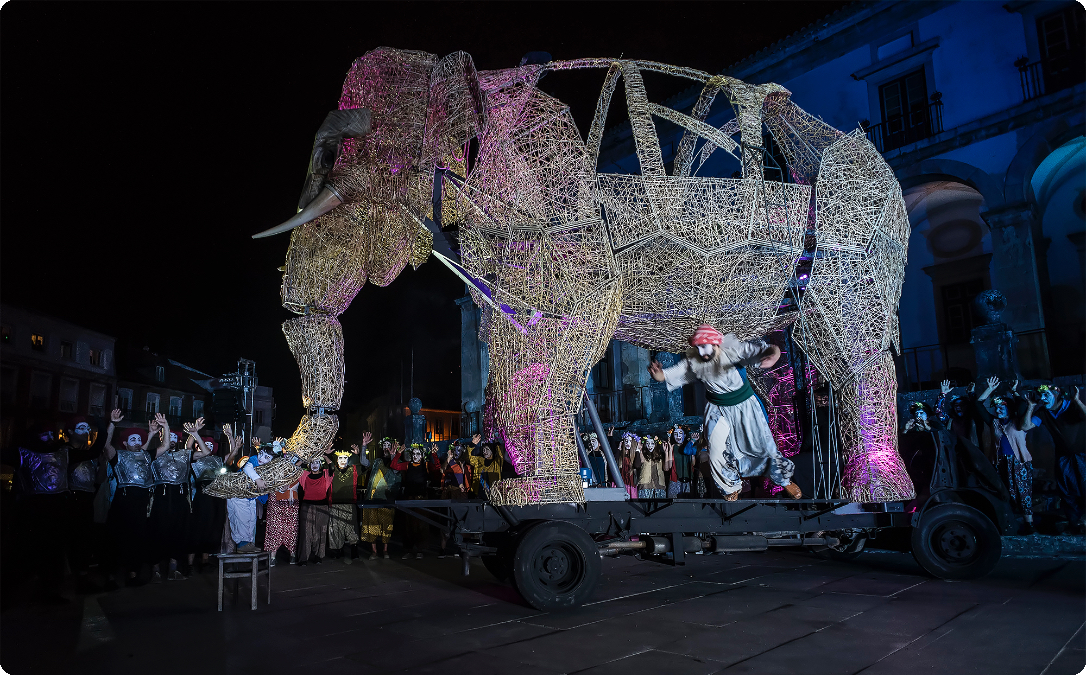 he novel Saramago was working on until just days before he died, Halberd, halberd, shotguns, shotguns (Halberds and Rifles), is published, accompanied by texts by Fernando Gómez Aguilera and Roberto Saviano and with illustrations by Günter Grass.

Publication of Lanzarote's Last Notebook (The Last Lanzarote Notebook), which collects together the diary entries made by the author in 1998. 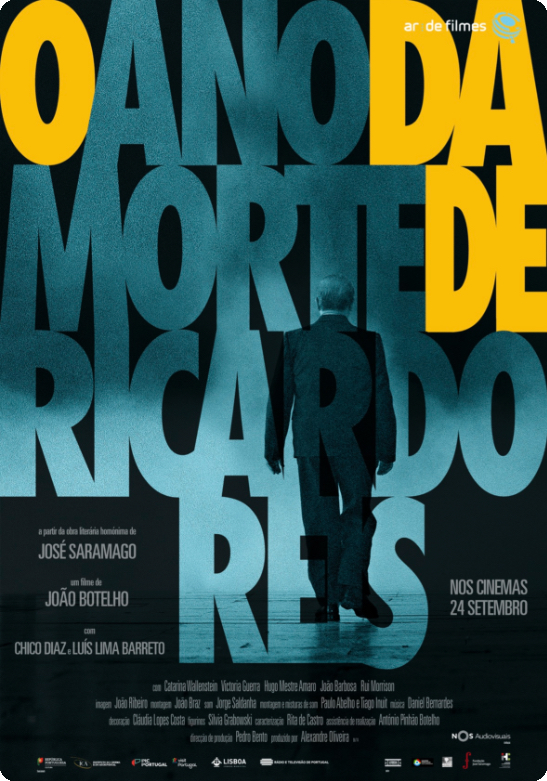 16 November, the author's 99th birthday, will see the start of various events commemorating his first centenary.